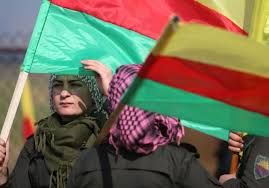 Sponsored by the Alliance of Middle Eastern and North African Socialists

Two hours of  discussion with  Kurdish Turkish,  Kurdish Iranian, Syrian Swiss  socialists  to be followed by  30 minutes for Q and A with the facebook audience.

As Turkey starts a full-scale military invasion of northern Syria to crush the Kurdish struggle for self-determination and push Syrian refugees into a zone under its control,  it has become clear that no global or regional power is interested in the emancipation of the Kurds or any other peoples of the region.   The current ominous situation demands a new kind of dialogue between socialists in the Middle East and North Africa region.   There are over 35 million Kurds in Turkey, Syria, Iraq and Iran.  The Kurdish struggle for self-determination has been an integral part of the history of the Modern Middle East.  Yet, authoritarian capitalist and imperialist powers have always used racism, ethnic divisions, sexism and the pull of capital to prevent the creation of a united regional revolutionary and socialist emancipatory movement.

Join us for a dialogue between  Kurdish Turkish, Kurdish Iranian, Syrian Swiss socialists . . .

For further details,  go to