From Syria to Sudan: State Violence and the Spectacle

Inspired by  Debord’s Détournement, activists use existing media to “turn expressions of the capitalist system and its media culture against itself. Likewise, activists are using media campaigns to counter Sudan’s blackout. Blue photos and hashtags such as #BLUEFORSUDAN and #IAMTHESUDANREVOLUTION have circulated across the web bringing the struggle to international light and solidarity. Short summaries of the Al-Bashir dictatorship and in real time updates are also being shared.

“The root of the spectacle is the specialization of power. It is hierarchical society’s ambassador to itself, delivering its official messages at a court where no one else is allowed to speak.”

In 1967, the Situationist Movement delivered one of the most profound critical Marxists positions on power known as the theory of the Spectacle. Derived from Marx’s commodity fetishism, the Spectacle describes the effect induced by an accumulation of images through which social relations are to be understood. It is a phenomenon that demands the reordering of life, politics and art. In this article, I will argue how the Spectacle along with State Violence has played an integral role in the subordination of people during the popular uprising in Syria and ,currently in  Sudan. Moreover, we will discuss ways to challenge and counter it.

In State Violence as State Terrorim (2012), Ruth Blakeley stipulates that state violence is ‘used to coerce populations into complying with the wishes of elites. It uses the violence to instil fear in an audience.’ In Syria, this form of state violence was enacted by two methods that are physical and psychological violence.

According to Human Rights organization IAMSYRIA, 7000 people have been killed in 2018 while 10, 000 people have been killed in 2017 alone. The total death count due to conflict exceeds half a million persons to date. The Syrian Observatory for Human Rights reported that by 2015 an estimated 200,000 Syrians have been arrested by government forces and 13,000 Syrians, including 108 children had been tortured to death in the prisons. Government crackdown on civilians, opening firing and killing peaceful protestors, mass rape and physical torture are some of the technqiues used by Syrian military forces.

The psychological violence which employs the politics of images, I propose, is as abrasive.   However,  it is  less quantifiable. By March, 2011, the statue of Syria’s former president Hafez el Assad was toppled  for the first time. An attempt at cleansing  the streets from state flags and symbols soon followed. What ensued was a major retaliation by the state perpetrated through images. Pictures of Bashar al Assad, his father or his children dominate public spaces like streets, traffic stops and sometimes would cover entire buildings. Slogans and graffiti praising them and affirming undying loyalty are to be found on every corner. These actions have been intentionally thought of, paid for and carried out because they serve a purpose. 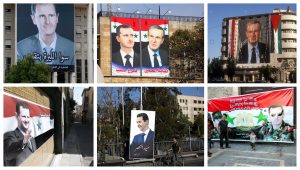 The collection of  these images are designed to create the idea of a man, of a president and a state that is omnipresent in an Orwellian manner. Often, the images would conflate the president with the flag as to say Bashar al Assad is Syria and Syria is Bashar al Assaad. They also serve as a reminder of the presence of the intelligence agency which is on constant surveillance for signs of political dissent. The spectacle reproduces a dynamic of power and subordination that is seemingly immortal and inescapable. It is through repetitive exposure to these images that the Syrain people have become habituated to the rule of  the al‐Assad family and its regime. As Malu Halas in Art of Resistance (2012) says “the messages of a brutal state can live in unexpected ways in the minds of the subjugated.” State products such as rubber bracelets, phone covers and t-shirts found their way into everyday life. This is an example of how commodities and the spectacle work to control social relations resulting in a system of self-monitoring and conformity.

As states, in this case Syria and Russia, conspire to maintain a stronghold as the ruling class, the spectacle likewise adapts to meet its demands.

As Sudan bears its own uprising, familiar scenes of military violence lead us to conclude that states act  similarly when their  hegemony is challenged. Earlier in June, doctors reported over 70 cases of rape against both men and women in the aftermath of  the destruction of a mass sit-in in front of the military headquarters in Khartoum. More than 100 people have been killed by security forces and as many as 700 have been injured in June The brutal crackdown comes after a two-day general strike demanded the transition from military to civilian-rule. Sources say the heads of state in Egypt, Saudi Arabia and the UAE have aligned to foment this counter-revolution. In State violence as State Terrorism (2012), Blakeley argues that such acts are not only intended to affect the direct victim but to also instill fear in osbervers and witnesses making the former an instrumental asset to the state. The target audience is then forced to consider changing their behavior in some way.

As for the spectacle, the Sudanese government has decided to subdue the people and their uprising via a media blackout. By maintaining full control on what media images go in and out of the country, the state dictates the dominant narrative, just as in the case of Syria. In recent years, social media has become a significant tool for political mobilization and has assisted in introducing  the Sudanese struggle to the rest of the world. The viral footage of Alaa Salah chanting for “thawra” (revolution) comes to mind. Through the internet black-out the spectacle becomes void-like,  designed to strip the people from their voice and power. The combination of violence and the blackout are designed to “stop demonstrations by breaking their organizational backbone and to cover government atrocities” (Sands, 2019).

In sum,  states, when not competing against each other, will work together to maintain hegemony. States will use violence to affect direct victims and deter third party observers. Lastly, state will use media and image politics to influence and control the people’s narrative and uprising.

If the spectacle is an apparatus for the monopoly on power in crony state capitalism,  then the spectacle itself can be used to dismantle it. Indeed, one of the first triggers of the Syrian uprising was an anti-Assad slogan graffiti sprayed in the city of Dar’a. It is difficult at first to conceive how a bottle of spray paint and the will of teenage boys led to the avalanche of events that followed.  But this act was a reclamation of public space from state authority. Reclaiming public space from state media and advertisers is a growing form of modern activism. 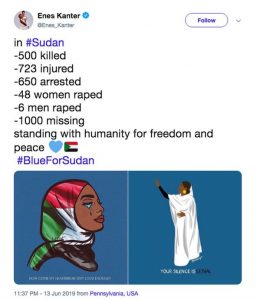 Inspired by  Debord’s Détournement, activists use existing media to “turn expressions of the capitalist system and its media culture against itself. Likewise, activists are using media campaigns to counter Sudan’s blackout. Blue photos and hashtags such as #BLUEFORSUDAN and #IAMTHESUDANREVOLUTION have circulated across the web bringing the struggle to international light and solidarity. Short summaries of the Al-Bashir dictatorship and in real time updates are also being shared.

Media visibility in the form of artwork, posters or graffiti in public spaces is a form of direct action which challenges image politics and confronts the Spectacle. Similarly, social media presence in the virtual can serve to redirect dominant political discourse. In his latest article Mason Sands (2019), argues that “there are still limits and gaps between social media awareness and political action.” To this I respond that bottom-up grassroots organization and subversive media can serve as the basis for a sustained revolution. 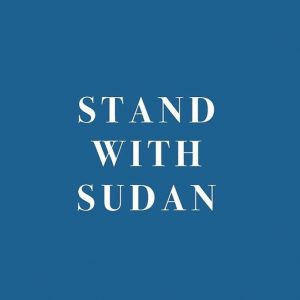