Two worker leaders and five journalists  in Iran have received long prison sentences ranging from 6 to 18 years.  For one of the workers,  the sentence also includes 74 lashes.  Many other labor activists, feminists,  oppressed minority, student and environmental  activists are languishing in prisons in Iran. 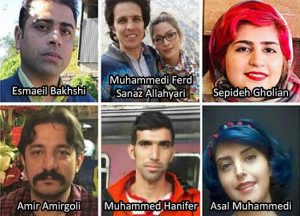 The latest sentences are part of the government’s heavy-handed response to more than two years of protests at the Haft Tappeh sugar mill in the city of Shush, Khuzestan Province,  demanding unpaid wages and workers’ rights.

The following activists were convicted of “national security” charges for participating in or covering those demonstrations, according to a post by the Haft Tappeh workers’ Telegram channel on September 7, 2019.

Protests to demand their immediate  release have been scheduled in several cities around the world.  Below is the list of a few.   More are being planned by Iranian socialist and international activists in other cities.

For more information you can contact  Shadyar Omrani at shadyar.[email protected], or go to this facebook page set up by the various organizers: