Below are short biographies of three Iranian political prisoners who strongly oppose any imperialist intervention in Iran as well as internal state repression and any regional imperialist intervention by Iran or other Middle Eastern states.    Each of these prisoners symbolizes an important aspect of the struggle for social justice and against religious dictatorship, authoritarianism and militarism.

Reza Shahabi, currently on a hunger strike at the Rajai Shahr  prison since August 9,   is a 42 year old worker and member of the executive board of the Tehran Bus Workers’ Syndicate.  As a child, he had been forced to stop his formal education after finishing seventh grade in order to support his family.  Later, as an adult,  he went back to school part-time, received his high-school diploma, enrolled in a university and began to study law while he continued to work as a bus driver.   Shahabi has been in and out of prison since 2010 when he was convicted of “sedition” for participating in labor strikes and organizing workers.  He has endured 19 months of solitary confinement and four hunger strikes.

In addition to his deep dedication to workers’ rights, he is also a strong advocate of  women’s equality.  He has also strongly criticized the anti-labor policies of both former president Ahmadinejad and current president Rouhani.  Shahabi has openly expressed his opposition to Iran’s military interventions in the region.  In a letter  from prison, on the occasion of International Workers’ Day in 2013,  Shahabi stated:  “While we condemn the warmongering and adventurist policies of sections of the Iranian government,  we demand the lifting of the economic sanctions which directly aim at  working-class families and toilers, and we strongly condemn any talk or thought  of a military attack which will be a deadly curse…”  (http://www.peykarandeesh.org/movements/816-shahabi.html) 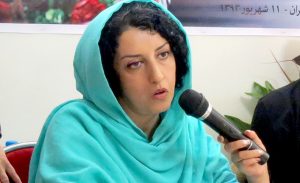 Narges Mohammadi, B.A. in applied physics,  is a 44 year-old journalist, women’s rights and human rights activist,  and  the deputy director  of  the Center for the Defenders of Human Rights (http://www.humanrights-ir.org/?lan=en) which was founded by Nobel Peace Laureate, Shirin Ebadi.

In 2009,  after the Green Movement’s mass protests to oppose the fraudulent election of Mahmoud Ahmadinejad,  Mohammadi  was arrested on charges of  “assembly and collusion against national security.”  She was subsequently put on trial and sentenced to eleven years in prison.  By 2013,  after developing severe health problems such as muscular paralysis and lung disease,  she was released after posting bail in the amount of $200,000.  [Family members or friends of a political prisoner usually submit deeds to their homes as bail money].   In 2015,  she was rearrested on charges of sedition and for starting a campaign against the death penalty.   Her opposition to the execution of innocent Sunni political prisoners was used by the courts to accuse her of “supporting ISIS.”   In 2016,  Tehran’s Appeals Court upheld the lower court’s 16 year prison sentence  on charges of sedition and starting an organization to oppose the death penalty.

Mohammadi who has two small children,  has often been barred from seeing  them or even talking to them on the phone.   In order to gain the right to be visited by her children or to speak to them on the phone now that they live in exile,  she has gone on hunger strike twice. She also continues to suffer from severe and life-threatening health problems but continues to speak out.   In December  of 2016,   after receiving the Human Rights Award of the City of Weimar,  she wrote a letter of appreciation from Evin prison in Tehran.  In this letter she had stated that “as a woman who is repressed,” she  “would rather be a prisoner and away from  family and friends,  than someone who is granted formal freedom.”  She had also emphasized that war and sanctions which target ordinary Iranians threaten human rights by weakening civil society. (    نرگس محمدی: جامعه مدنی ایران را یاری کنیدDeutsche Welle, Nov. 12, 2016 and  جایزه حقوق بشر وایمار برای نرگس محمدی Radio Zamaneh, 21 آذر 1395 ) 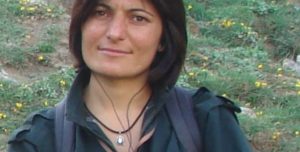 Zeynab Jalalian is a 35 year-old Kurdish political activist who was arrested and imprisoned in 2008 for her activities with the political wing of the Kurdistan Workers’ Party.  She received a death sentence which was later commuted to life in prison without the possibility of parole.  Jalalian who comes from an economically disadvantaged family, fled her home at age ten because her family would not allow her to continue her education.   Since her arrest and imprisonment,  she has suffered from systematic abuse,  torture and solitary confinement for refusing to “confess” to armed actions which have been attributed to her by the state.   During the course of her imprisonment,  she has developed an eye disease which could have been  easily cured but has led to blindness because of deliberate lack of treatment by prison authorities and the state.

In a recent open letter addressed to Jalalian,  another woman political prisoner,  Golrokh Ebrahimi Iraee, wrote:  “There are very few people like you who can tolerate this inverted world  and give of themselves to keep  the idea of free spirit alive on the pages of history. . . One day, life under ignorance and constant surveillance and their thought-police will end.” (  گلرخ ایرایی،  “ما در جای درست تاریخ ایستاده ایم.”  Akhbar-rooz, April 12, 2017)

If you would like to express your solidarity with Iran’s political prisoners, help organize a discussion on the current situation in the Middle East at your school or union or community organization.  Contact the Alliance of Syrian and Iranian Socialists  at   https://allianceofmesocialists.org/latest-additions/

If you are in Los Angeles,  come to a panel discussion on “Mass Incarceration and the Global Rise of Racist Authoritarian Capitalism”  on September 23,  sponsored by the L.A. Coalition for Peace, Revolution and Social Justice

International Alliance in Support of Workers in Iran