On September 26, 2019, hundreds of Palestinians took to the streets to protest femicide. The demonstrations which took place in Haifa, Jerusalem, Ramallah, the West Bank and the Gaza strip, were organized via Facebook under the event “Free Homeland, Free Women”. The slogan aimed to address the connection between Israeli Occupation and the systematic killing of women in Palestine.  Lema Nazeeh, one of the organizers said “You can’t divide the concept of freedom. Fighting for women’s rights stems from the same concept as fighting Israeli colonization”.

The wave of protests is sparked by the recent murder of 26-year-old Israa Ghrayeb, who is believed to have been beaten to death by family members. The tragic incident sheds light on the universal violence committed against women. The Arab Center for Safe Society has reported that 11 Palestinian women have been killed by relatives or close family members this year alone. This form of violence can be seen as a symptom of larger patriachal structure which legitimizes the subjugation and mistreatment of women.  In a recent article, Sabiha Allouche suggests that “..the killings of Israa, Tara, Karar, Ahmad and dozens of non-conforming bodies, signals a form of patriarchy that must reassert itself at any cost.”

The hashtag “Tal3at” (Coming Out in Arabic) was used as part of the call for mobilization which found international solidarity in places like Beirut and Berlin. The protestors’ demands included immediate action against gendered-violence and the recognition of women’s right for autonomy as central to Palestinian self-determination. Protests clashed and face repression by the police force in Jerusalem.

Below we reprint the article by by Sabiha Allouche which Lara al-Kateb has quoted from: 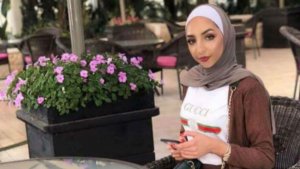 I am not a journalist. I have not investigated Israa’s death. But I am, like millions of us, appalled.

There is a particularly macabre aspect to Israa’s killing, and it directly challenges those conventional and lazy analyses that pin Arab women against inherently misogynist men who cannot resist the call of the so-called honour siren.

Israa is not the first person to run afoul of someone else’s vision of how she should behave. Narrowly defined gender rules have led to violent backlash against both women and men before her who are deemed to have acted “inappropriately”.


Soon after Egyptian Alyaa Al-Mahdi posted a photo of herself naked in 2011, she fled to Sweden. When Lebanese athlete Jackie Chamoun posed topless for a sports calendar, controversy soon ensued.

Unlike Alyaa, though, whose nakedness worked staunchly against the Egyptian national psyche, Chamoun’s revealed body was tolerated because it posed little risk to the already heterosexist and neoliberal logic of the Lebanese state.

Other bodies, alas are not as lucky as Alyaa and Chamoun. Lines of flight, after all, are only possible for those privileged enough.

I am particularly thinking of the killings of Karar Nushi and Ahmad Majid Mutairi in Iraq – may their souls rest in peace. Both men were killed for “looking gay.” Also from Iraq, I recall the death of Instagram influencer Tara Fares. Which brings me back to Israa.

Israa did not pose naked, was not accused of looking gay, and she certainly did not tease her followers with her feminine quirks – none of which should ever be reason for mansplaining or judgement, let alone killing.

Her widely-circulated photo post-death reveals a rather “well-behaved” and “good” daughter: a veiled young woman who, prior to her death, made the terrible decision to post a photo from an outing with her date, a potential suitor, who had her parents’ blessings.

It’s important to contrast these senseless killings in support of my argument: Israa’s killing is NOT a matter of honour killing and women are NOT the sole bodies targeted in this case.

It seems that any “body” that crosses the limits of what is considered to be the “right” gender and the “right” sex is under threat.

Never has gender mattered more so than it does today. Governments are shutting down gender studies programmes, and so-called incels are committing mass shootings in the US on a regular basis. The wave of protests that the Middle East witnessed in 2011 ultimately resulted in a backlash against women, LGBT individuals and young people, and its repercussions can be observed across the region today.

As Kandiyoti points out, it comes into play at “the point when patriarchy-as-usual is no longer fully secure, and requires higher levels of coercion … to ensure its reproduction.”

As a reminder, 2011 is not the year where Arab women took to the street. 2011 is the culmination of decades women’s activism and mobilising.

Ironically, the killings of Israa, Tara, Karar, Ahmad and dozens of non-conforming male and female bodies is a bittersweet paradox: Their killings signal a a patriarchy that must reassert itself at any cost.

Take, for example, the case of the recent clampdown on the band Mashrou’ Leila in Lebanon. Mashrou’ Leila, who have been in operation since the early noughties have been viciously targeted by religious authorities and civilians alike.

Opposition to them from civil and religious quarters, reminds us of the hetero-patriarchal thread that binds society to religion and religion to the state – at least in the case of Lebanon. It is time we steer away from episodic analysis of violence and acknowledge a structural one instead.

From femicide to gendered violence

Some have cast Israa’s killing as yet another “honour killing.” The term is inaccurate, but her death can’t be defined as femicide either, especially when examined in tandem with Tara’s, Karar’s or Ahmad’s.

Women are killed by their partners daily in the US, but we hear no mention of threatened masculinities making up for their hurt ego by committing the murder.

On the contrary, such killings find solace in the legal realm, whereby a “crime of passion” is attributed to men gone “rogue.” In other words, the law itself contributes to sustaining femicide.

We must acknowledge the very masculinist and hetero-patriarchal structures that define masculinities simply in relation to femininities, and vice versa.

These structures do not operate in vacuum. They operate alongside and at the very core of a global economy that is largely sustained by highly gendered and masculinist mechanisms: wars, the military, technological advances, scientific research, to name a few.

Each and all are premised upon and made sustainable by inherently racialised and gendered binaries, such as Female/Male, Civilian/Military, Eastern/Western, Muslims/non-Muslims.

Indeed, as soon as a femicide migrates across an Arabo-Muslim border, it is repackaged and sold as “honour killing” – a colonial and Eurocentric construct par excellence.

The result is the imagined categories of helpless Arab women and fragile Arab men whose masculine ego is easily threatened.

Absent from this reasoning are the material realities that encapsulate the lived reality of most men and women in the Middle East: Intense militarisation and extreme geopolitical overhauling that jointly work towards dislocating and relocating entire populations.

When an order is threatened, it is not disorder that ensues. Instead, re-ordering comes in force.

The war on Yemen, the unstoppable rise of Islamic State, the unprecedented clampdown on freedom of speech in Egypt, the intensification of sectarian rhetoric in Lebanon, the explosion of super-infrastructure projects from Morocco to Jordan, to name a few, all converge in a singular locus: A pan-Arab masculinist restoration.

Each of these spaces is anchored in patriarchies that overlap both conceptually and geographically while constructing particular sexual regimes that target both men and women.

We are not all Israa

By insisting that we are all Israa, we fall into the trap of essentialising women by positing them against an equally essentialised category of men.

Youth poverty and unemployment are ravaging the region. There are generations of men and women who find themselves in an increasingly militarised and surveilled climate. A political economy of violence that sees socio-economic, political and ideological processes intersect to produce excessively precarious lives is clear.

Geographical location, degree of connectivity to influential others, degree of proximity to the state, and a whole array of factors produce unequally precarious bodies.

Certain bodies are evidently going to be targeted more so than others. At the same time, those most destitute helplessly cling to perceived societal obligations.

This is not to defend any of the killers involved inasmuch as to make seriously rethink the myths of “Arab men,” “Arab women,” and “honour killings.”

Similarly, we must remind ourselves that entire collectives of men across the region have been contesting existing hetero-patriarchal values and as many women, far from being passive, directly or indirectly contribute to sustaining patriarchy-as-usual.

All of this in a time of congealing borders, nationalistic trends and hyper consumerism. In the fight against gendered oppression, we must beware of the simultaneity of interlocking violent structures that produce binaries and lazy analyses.

Sabiha Allouche is Lecturer in Middle East Politics at the University of Exeter. She is interested in the interplay between gender and politics. She is also on the advisory board of the journal Kohl: a journal for Body and Gender Research.

Opinions expressed in this article remain those of the author and do not necessarily represent those of The New Arab, its editorial board or staff.