Solidarity with the MENA 2019 Uprisings: Statement by Alliance of MENA Socialists

At this critical moment,  socialists in the MENA region and elsewhere need to come up with creative ways of expressing their solidarity with these uprisings and connecting  them to each other and to  revolts in other parts of the world such as those in Chile and Hong Kong, China.  This statement offers some ideas for solidarity work.

The Alliance of MENA Socialists express their solidarity with all the new 2019 uprisings in the MENA region from Sudan to Algeria,  Iraq, Lebanon and now Iran.   These revolts have shared some important features:  The opposition to authoritarianism, neoliberalism,  poverty, inequality, exploitation, sectarianism and religious fundamentalism;   the active participation of women who are at the forefront  and raise explicit demands for women’s rights;   The predominant presence of working class and unemployed youth.  The protesters are not content with the resignations of leading political figures or prime ministers but demand a fundamental change in the current socio-economic and political system.

At the same time,  the might of the authoritarian capitalist ruling systems backed by various global imperialist and regional imperialist powers cannot be underestimated.   In Sudan,  the agreement signed by the military and the opposition coalition still leaves significant power in the hands of the military,  although some success has been achieved as the Sudanese transitional authorities recently approved a law to dissolve the former ruling party and repealed a public order law used to regulate women’s behavior.    In Lebanon, despite prime minister Hariri’s resignation, sectarian and neoliberal political parties still oppose any kind of radical change demanded by large sectors of the protest movement.    In Iraq, the revolt of the masses in Baghdad and the  predominantly Shi’a south against the Iranian backed government is now being joined by small but growing sectors of  Sunni inhabited areas,  while signs of support  for the revolt are appearing in Iraqi Kurdistan.    The Iraqi government and Shi’a Islamic fundamentalist militias affiliated with the Iranian government,  all in collaboration with  Iran’s Islamic Revolutionary Guard Corps (IRGC) have killed over 450 protesters so far.     In Iran,  the uprising that began on November 15 has spanned the entire country and has been the strongest show of popular opposition to the regime thus far.    The repression by the IRGC and other security forces has also been ferocious and has led to at least 208 deaths (according to Amnesty International)  and  more than 800 deaths and over 7000 arrests according to forces on the ground.    The estimated number of deaths is rising as reports are being sent from  Iran.  The majority of deaths however are those of protesters in Khuzestan and Kurdistan.

At this critical moment,  socialists in the MENA region and elsewhere need to come up with creative ways of expressing their solidarity with these uprisings and connecting  them to each other and  to revolts in other parts of the world such as those in Chile and Hong Kong, China.

In general,  our struggles have been the weakest when it comes to  offering an emancipatory alternative to capitalism.   Challenging neoliberal capitalism has been a good first step.  Popular uprisings throughout the world have demonstrated the rejection of this model.  However,  as socialists,  we must be clear:   All forms of capitalism,  whether private or state,  need to be challenged.   In the face of this reality,  socialists need to be painfully aware of the serious and international efforts required to develop and offer an alternative.

Our destinies are linked. 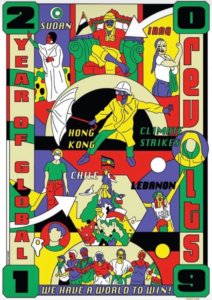