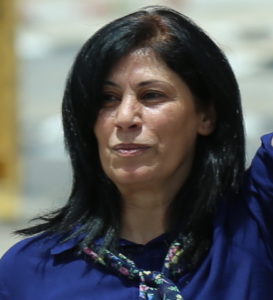 We publish the the following article as part of an ongoing series calling attention to the state of political prisoners and the importance of the MeToo movement in the MENA region.

The “banana” position is a method used in interrogation which involves bending the back of the detainee in an arch to tie their hands and feet together while they are seated on a backless chair. This is one of the measures taken by the Israel Security Authority against Palestinian detainees.  These are considered acts of torture and illegal under International law.

Mais Abou Ghosh, a 20-year-old university student majoring in journalism was arrested last August and has been held in detention since then. Charges against her include conspiring against the state, alluding to her involvement in conferences and radio shows. When Mai’s family visited her in prison after a month of her arrest, her mother said she “could barely recognize her as her daughter” as her face had been badly bruised. Upon further discovery, it was revealed that Abou Ghosh had been subjected to beatings, verbal harassment, naked inspection and bound to the “banana” and “frog” positions.

The case of Mais Abou Ghosh follows a series of arrests by Israel authorities targeting Palestinian students. Right to Education, a grassroots campaign aimed at protecting education in Palestine reported that 64 students have been detained in 2019 with growing numbers amid the crackdown. Palestinian prisoners’ rights organization, Addameer details 260 cases of Palestinian high school and university students currently in Israeli prisons with 95% of students being subjected to torture upon their arrest.

The former executive director of Addameer, Khalida Jarrar was also arrested as of late last year. A longtime advocate for the freedom of Palestinian prisoners and a member of the Popular Front for the Liberation of Palestine (PFLP), Jarrar had been organizing classes on human rights and sought ways to continue formal education for students in prisons. According to her daughter Yara, the human rights and feminist activist was arrested after Israeli occupation forces raided their home with over 70 soldiers and around 12 military vehicles at 3:00 am. This is the fourth time that Israeli authorities have detained Jarrar.

Middle East Eye Monitor reports on a rise in the number of female Palestinian prisoners in Israel jails with 10-15 arrests made every month. According to the Journal of Palestine Studies, Palestinian women are subjected to sexual violence and other gendered forms of coercion at the hands of the Israeli occupation regime. The paper further argues that “Israel uses the incarceration of women as a weapon to undermine Palestinian resistance and to fracture traditionally cohesive social relations; and more specifically, that the prison authorities subject female prisoners to sexual and gender-based violence as a psychological weapon to break them and, by extension, their children.” It is for this reason that the MeToo movement on a global scale must intersect with the rights of political prisoners. Challenging patriarchal violence is rooted in the same struggle for peoples’ self-determination against state violence.